Now it’s time to finally look at how we can use what we’ve done in part 1 and part 2, and add the ability to use offsets with sunrise and sunset time. When we’re talking about offsets, we mean using for example the time of the sunrise in a conditional but shifted by a predetermined amount. An example: you have a shortcut triggered by a motion sensor, that turns the light to a specific brightness level and color if the time is between an hour before and an hour after sunrise. Using the same method as before, doing whole hour offsets is fairly easy, but doing half an hour or 10 minutes is a bit trickier. We’ll take a look at both.

If you haven’t read part 1 and part 2, I suggest that you look at them first as this post will continue where part 2 ended.

This will be a long one 😁

(In case you’re using an adblocker, please consider whitelisting this site. Any revenue from Google ads goes to the costs of running this site.)
Advertisements

If you’ve read the comments/discussion for part 2, you might be aware of some possible problems using Current Weather in combination with Weather Conditions to get sunrise and sunset times. If you are using this function to query the time of sunset, and the sunset has already passed, you will get the time of the next day’s sunset (if you ask for the sunrise time at this point, this will also be given for the next day). If you live in a place which uses DST (daylight saving time), this could affect you twice a year, as the time of the sunrise and sunset for the next day would be off by one hour. This would also affect you in case you are not converting the time into numbers, but just compare sunset time and current time as time objects.

To use an offset of minus or plus whole hours is actually quite simple in most cases. However, it’s always the edge cases that makes everything a bit more advanced. Things to think about:

We’ll try to guard for parts of these cases in the example.

We’re going to create the variables SunriseTime and SunsetTime that we created in part 2 as our starting point. Since I will use Daily forecast instead of Current Weather in this example, I will take it from the beginning as this adds a step. Time in these variables is represented as a number. To refresh our memory, here are a few examples:

We start by getting the Daily forecast at Current Location. We then extract the sunrise time using Get Details of Weather Conditions. Using the Format Date action and Date Format Custom we use the letters Hmm as the Format String (the Format Date action are not opened up in the screen shot, but this is the same as in part 2). Remember that the string is case sensitive!

Since the Daily forecast returns a forecast for 11 days, we must extract the first element of the list to get the current date’s sunrise time. Use the Get Item from List action for this. As a safety measure we then convert the string into a number using the Get Numbers from Input action before saving it to a variable named SunriseTime.

We then do the same for the Sunset time, but here we can omit the Get Daily forecast and directly use the Get Details of Weather Conditions, and then use a magic variable to point to the daily forecast at the top. The rest of the steps are the same.

As each full hour is represented by the number 100, by adding or subtracting 100 we offset the time with 1 full hour (and 200 for two hours, and so on).

1. Two hours before sunrise and three hours after sunrise 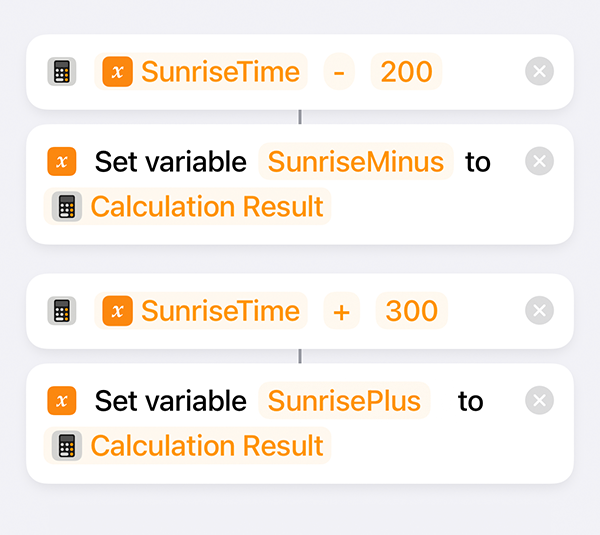 In this example we want to turn on a light when a motion sensor detects motion and it is between two hours before sunrise and three hours after sunrise.

We’re going to start by creating two new variables, SunriseMinus and SunrisePlus. As you might have guessed the first contains the time of sunrise minus two hours and the second sunrise plus three hours. These can then be used in if-statements, just as we did in part 2.

We start by adding the math action called Calculate. For the first number we’ll choose the variable SunriseTime. We’ll change the default operator the plus sign (+) to a minus sign (–). As the second number we write 200 (which stands for 2 hours). Next, we’ll set the result of this calculation to a variable named SunriseMinus.

We then do the same for the positive offset. This time we add 300 to SunriseTime and save it to a variable named SunrisePlus.

Special case 1: Check if the number in the variable is negative or too large

If we use large offsets or if the sunrise or sunset is close to midnight, the result of our calculation might have resulted in a negative number, or a number which is too large (larger than 2359). We can check and correct for it using if-statements and corrective calculations. If the number is negative, we’ll add 2400 to it, and if it’s larger than 2359, we’ll subtract 2400 from it.

After Otherwise, we nest a second if-statement where we check if SunriseMinus is greater than 2359 (which means one minute before midnight). If this is true, we use another math action Calculate where we select the variable SunriseMinus as the first number, change the operator to the minus sign (–), and put 2400 as the second number. After that we use the Set Variable again to overwrite the variable SunriseMinus with the Calculation Result.

Now we have guarded for the possibility that the SunriseMinus variable could be a negative number, or a too large number. Time to do the same thing for the SunrisePlus variable. I will not repeat it in the text, but you can check it in the screen shot.

Special case 2: The time of sunset is after midnight or offset has pushed over the date line

In some regions of the world, during some time of the year, the time of sunset is after midnight. The sunrise can also be only a few hours after midnight. A problem arises when you need to compare two time values that are on different sides of midnight. For example,

We can start by checking if SunsetMinus is larger than SunsetPlus. If this is true, we know we have a special case that needs to be taken care of. But instead of using another two if-statements to check SunsetMinus to 2359 and 0 to SunsetPlus, as we already know SunsetMinus is the larger number, we can switch the conditional around asking if current time is NOT between SunsetMinus and SunsetPlus. I want you to take a minute to think about this, and to do that we are exchanging the numbers to different numbers.

Now, there is no is not between option in the if-statement, but we can use the Otherwise line for this.

Before we start adding the if-statements, we need to create a new variable with the current time which we will name TimeNow. We do this the same way we did it in part 1 and part 2. I do want to say that in iOS 15 it might be a bit tricky to find Current Date when using Format Date. When you select Date, you need to scroll to the side the little bar that starts with Select Variable to find Current Date.

2. Offsets that are not whole hours

If we want to do offsets that are not in full hours, we will need to convert the time numbers from hours and minutes to only minutes. As this has become quite a long post, I will explain how to do it in broader terms instead of a step-by-step tutorial.

Converting hours and minutes to only minutes is of course done by taking the number of hours (0-23) and multiplying them by 60 minutes. Then add the number of minutes to that. I’ll show you an example of how to do that with the current time variable TimeNow. You need to start with Format Date where you use Current date as the input. As before you use a Custom Date Format, but this time you write only H in Format String. You then use the math function Calculate to multiply the hours number with 60. You then save that to a variable named TimeNow. You need to use a second Format Date with Current Date as input, and Custom as Date Format, but this time you put a single m in the Format String. This will give you the number of minutes without leading zeros. You then use a second Calculate function to add the minutes to your TimeNow variable, and then overwrite the old TimeNow variable with the result of the calculation. You now have the current time as minutes in the variable TimeNow. 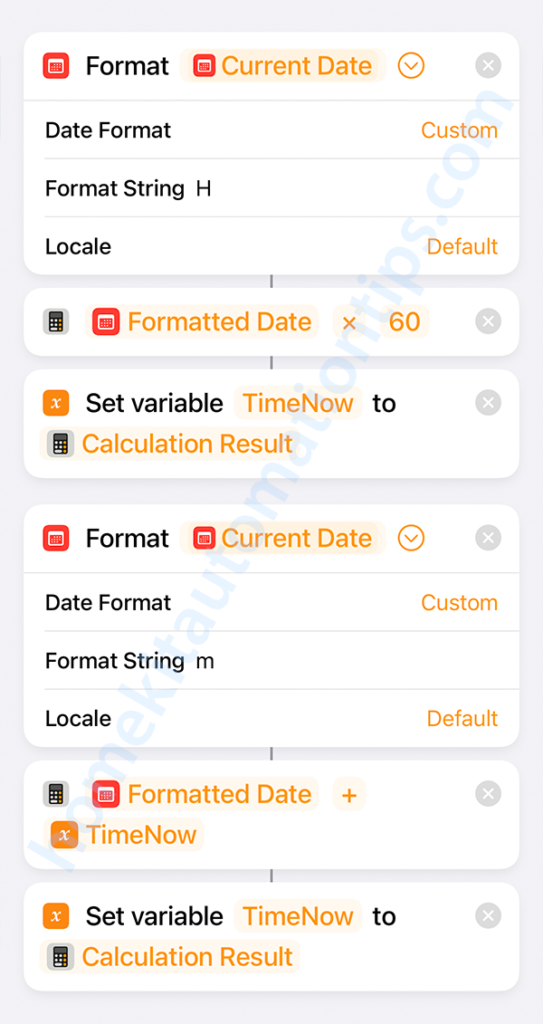 To get the time of sunrise or sunset into minutes, you’ll need to take the same steps using double Format Date functions.

Special case 2: The time of sunset is after midnight or offset has pushed over the date line
Here we do the same as we did when we were using military time. However, one minute before midnight is not 2359 but 1439. The logic is still the same.

When I listed edge or special cases, I wrote about a possibility that there are no sunrises or sunsets for several days, which happens every year if you live in a very northern or southern place on the globe. As I’m not sure of how this would be reported by the Weather function, it’s something I’ll have to come back to later.

If you’ve gotten this far, you should pat yourself on the back 😄 This post became quite a bit longer than planned. If you’ve got any questions about what was explained in this post, please leave a comment and I’ll try to explain it more thoroughly.